Archive for the tag “raising hand” 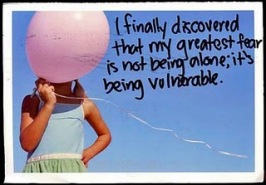 Lately I’ve been good about speaking up when I want to compliment someone.  Just a few hours ago I complimented a girl I sit next to but don’t talk to much who was wearing a pretty dress.   I answered a couple of the teacher’s questions in Lit class yesterday too when only about me and one other guy were answering his questions.  Everyone else was silent, and I think a lot of people hadn’t read, but luckily I’d finished the book a few weeks ago and knew enough to be able to respond to his questions.

This month I am going to let myself be more vulnerable with friends and share my stories, experiences, thoughts, and open up and confide more.  I’ll probably have to hang out with people one-on-one to be able to do that, as it’s much harder for me to do that in a group and I tend to have my deeper conversations when it’s just me and one other person.  In doing so I also hope to learn more about my friends and have a deeper connection with them.  Another goal will be to act more energetic, enthusiastic, friendly, and silly to keep things light and not too heavy with all the deep opening up I’ll be doing.  My psych textbook was saying that if you want to change your attitude you can change your behavior, since when you change one thing the other will feel a need to align itself with that change as well.  So I will try that out.

Those are two behavioral things I can work on.  Two cognitive things I can work on are to quit expecting negative results & the worst to occur, and also to imagine positive responses and closer friendships.  For a lot of my friends I only have the remainder of senior year to be with them and get closer before we all split ways for college.  I will probably see several of them again during breaks and what not, but it will never be quite the same as it was in high school and will be more difficult to get together.  I hope I stay in good contact with my high school friends even through the distance.  It will be different without them though, as I’ve lived in the same town for all of my life so far.  I won’t be moving away until after I get my general education completed through community college, but in two years or so I will be in a different place.  I am excited for that though even though I am nervous too.  I think it’ll be important for me to go somewhere different with a fresh start.

Ugh, I was trying really hard to raise my hand in psych class tonight, but still I couldn’t do it!!  I had read the chapter in advance, written out all the notes in advance off of her powerpoint notes that she’d be showing tonight, made flash cards, knew the material really well, and even had about 7 possible questions I could ask on the side of my notes, and STILL I didn’t raise my hand!

Why is this class so hard for me to participate in?  Is it because there are more people and a majority of them are older than me?  I guess I do feel a little intimated, I think I’m one of very few high schoolers in the class.  But I got an A on the last test and she said there were only 5 A’s total in the class, so it’s not like I’m not doing well in her class or what I say isn’t going to be intelligent enough.

It’s just when that class gets going, I get in this comfort zone that’s hard to break out of.  It’s easy to hesitate and not act when she pauses.  I’m very envious of the people who can just speak aloud what they want to say or ask questions on a regular basis.  It seems like my questions aren’t really that necessary for me to ask, because I already know the material so well and don’t really need my questions answered since they’ve just been thought up for the sake of asking a question.  And the questions I thought of she often went over so there wasn’t really anything I could say after that.

So maybe I should try not doing my notes, reading, or making the flash cards and see if I can think of more questions when I don’t know the material as well?  I don’t know, this is tricky…I was in the right mind set tonight too, feeling confident and like I could do this.  But I just couldn’t move my arm and ask what I had prepared.  I’m definitely going to keep trying though.

Two in a Row

In first period today I raised my hand to answer a simple math question! 🙂  I did feel a little nervous beforehand and hesitated once the room got silent.  But I did it quick enough where I didn’t have too much time to think about it. She didn’t see my hand though, so I just said it aloud surprisingly enough.  I said how to solve the problem and the answer that you would get.

It was a good thing I answered because she was starting to think we couldn’t do simple math.  She then asked if anyone had a calculator, and she looked at me and saw I had one.  So I offered to do the calculations that she asked me to put in and I read them aloud.

I spoke more all period than anyone else did in the class, though after a while I thought some of the others were probably getting annoyed with me.  But if they thought that oh well, that’s the second time I’ve ever raised my hand in her class so it’s not like I say much often.

It felt good, and the more I spoke aloud the more confident I became and could keep speaking.  I even spoke without raising my hand since most of my teacher’s attention was on me and she sort of expected me to keep answering I think.  Usually I always feel the need to raise my hand to answer questions because I’ve gotten so used to it over the years, but now in my senior year classes and college class it seems like it’s not really expected anymore.  That’s probably because by now the teachers figure we know when to talk so we’re not interrupting.  I still prefer raising my hand though.

Does anyone else feel like they still want to raise their hand even when they don’t really have to?

This morning I went to school with the mindset that I would start working on my newest goal: participating in class.  I didn’t necessarily expect myself to go into raising my hand right away though.  I figured I would just try and observe my reactions to see if I could somewhat control them.

I did more than I planned on though.  😉

In first period I decided to say something to the guy next to me, who is also very quiet.  I asked him a question about one of the assignments for the sake of starting some sort of conversation even though I didn’t really need to know the answer.  He wasn’t sure about the answer, but he smiled and spoke softly. I’m glad I asked him because he seemed friendly and sweet.

Then our teacher talked for a while about when the upcoming assignments were due (answering the question I didn’t really need to know anyway since I was already done).  After she finished talking, she passed back papers.  I raised my hand quick before I could put too much thought into it and asked her a question from one of the assignments.  The whole class was talking then and no one was paying attention, so it was much easier to raise my hand and just talk one-on-one with the teacher.  I later asked her another question without raising my hand when she walked past my desk.  She was able to help me, and I got all my questions sorted out.

At lunch I sat with a group of 7 friends that I don’t know too well, except one of them I am close to.  I felt more aware of my shyness in the larger group and noticed that lunch is a lot more fun when I’m just spending it with a couple of close friends in a small group or one-on-one with someone.  We all sat on the ground in a spread out oval-like shape, and I contributed every once in a while to the conversations, but not as much as I normally would in a smaller group.  I felt like I couldn’t talk loud enough to be heard by all the people in the group and a lot of them were able to talk pretty loudly, so I didn’t say too much.

In 6th period, I started thinking more about raising my hand in class.  In this class the teacher always asks a lot of questions and asks for people to volunteer, so I knew this would be a good class to start participating in.  I’ve raised my hand a few times in his class, but most of the time I think about answering and then can’t bring myself to do it and feel incredibly awkward.  A couple questions were asked that I could have possibly answered, but my heart started beating really fast at the thought.  So I paid attention to it and tried to slow it down a little and remind myself of past successes I’ve had when I’ve contributed in his class, and it helped a little.

Then he asked a question about a topic from the book that I had written my journal entry on, and I knew if I was going to answer any question it’d be that one, since I had already written out my answer for the journal prompt.  I felt ridiculously nervous though, more than I have felt in a long time. I was actually shaking a little, and was wondering why I had set this goal for myself and how easy it would be to just not do it.

But I raised my hand as soon as the question was asked.  I was called on, and as I answered my voice was a little shaky embarrassingly enough. It also sounded a little raspy and not like it normally does.  I found that I couldn’t talk as loud as I would have liked to have, and felt like I could have projected more.  But I did it, and he liked my response, and called on another guy who had a different response, but he said they both are two valid ways of seeing things.  He then asked if I could think of an example of what I said from the book and right away I thought of one on the spot and brought up another good point, which he was glad I brought up.

Afterward I was so relieved to have done my participating for the day, it felt pretty good.  I thought now all I had left in my day was going home, eating some cake my mom made since she hadn’t been able to make me a cake last week, and walking the dogs.  I was happy with myself, and I’m so relieved to have the first one out of the way.  I guess I can do this after all!  Next time hopefully I won’t start shaking though, because that was a little overwhelming and I didn’t expect that.